Analysis of abnormal conditions of circuit board processing

During the processing of PCB circuit boards, it is inevitable that there will be several defective products, which may be caused by machine errors or may be caused by human factors. For example, there may be an abnormal situation called a hole breaking state. Specific analysis of the specific situation.

If the hole breaking state is a point-like distribution rather than a complete circle breaking phenomenon,
it is called a point-shaped hole breaking, and some people call it a “wedge hole breaking”.
Common causes arise from poor processing of the desmear process. When the PCB circuit board is processed,
the desmear process is first treated with a leavening agent, followed by a strong oxidizing agent “permanganate”,
which removes the dross and creates a microporous structure.
The oxidant remaining after the removal process is removed by a reducing agent,
and the typical formulation is treated with an acidic liquid.

Since the residue is not seen again after the treatment of the slag, the monitoring of the reducing acid is often neglected,
which may leave the oxidant on the wall of the hole. After the board enters the chemical copper process,
the board will be micro-etched after the pore treatment, and the residual oxidant is again soaked by acid to peel off the resin in the residual oxidant zone, which is also equivalent to destroying the pore former. 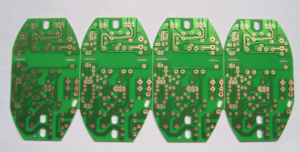 The damaged pore walls will not react in the subsequent palladium colloid and chemical copper treatment,
and these regions show no copper precipitation. The foundation is not established,
and the electroplated copper will of course not be completely covered and the dot-shaped holes will be broken.
This type of problem has occurred in many circuit board factories during the processing of the board.
It is important to note that the syrup monitoring step of the slag removal process should be improved.

Every step in the processing of PCB boards requires strict control because chemical reactions sometimes occur slowly
in the corners we don’t pay attention to, thus destroying the entire circuit. Everyone is wary of this kind of hole breaking state.

Bare boards (with no parts on top) are also often referred to as “Printed Wiring Boards (PWB)”.
The substrate of the board itself is made of a material that is insulated and heat-insulating and is not easily bent.
The thin circuit material that can be seen on the surface is copper foil. The original copper foil is covered on the whole board,
and part of the manufacturing process is etched away, and the remaining part becomes a mesh-like small line.
These lines are called conductor patterns or wires and are used to provide electrical connections to the parts on the PCB.

Usually, the color of the PCB board is green or brown, which is the color of the solder mask.
It is an insulating protective layer that protects the copper wire and prevents short circuits caused by wave soldering,
and saves solder usage. A layer of silkscreen is also printed on the solder mask. Text and symbols (mostly white) are usually printed on top of this to indicate the position of each part on the board. The screen printing surface is also referred to as the legend.

In the final product, integrated circuits, transistors, diodes, passive components (such as resistors, capacitors, connectors, etc.)
and various other electronic components are mounted. By connecting wires, electronic signal connections and organic energy can be formed.