How to control the relationship between line width and current during PCB design?

We generally have a common sense when drawing PCBs, that is, thick wires (such as 50 mils or even above) where large currents are used, and thin wires (such as 10 mils) for small current signals.

For some electromechanical control systems, sometimes the instantaneous current flowing through the line can reach more than 100A so that a thinner line will definitely cause problems. A basic empirical value is 10A/mm2, that is,
a current with a cross-sectional area of 1 mm2 can safely pass a current value of 10A.
If the line width is too thin, the trace will burn out when a large current passes. Of course,
the current burned trace also follows the energy formula: Q = I * I * t, for example, for a trace with 10A current,
a 100A current glitch suddenly appears, the duration is our level, then the 30mil wire is Definitely able to withstand.
(At this point, another problem arises, the stray inductance of the wire, which will produce a strong back electromotive force under the action of this inductor, which may damage other devices. The thinner and longer the wire stray inductance The larger,
so the actual length of the wire should be considered.)

General PCB drawing software often has several options for copper via-hole pads on device pins: right-angle spokes,
45-degree spokes, and straight. What is the difference between them? Novices often don’t care too much,
just pick one and look good. actually not. There are two main considerations: one is to consider not being able to dissipate heat too quickly, and the other is to consider overcurrent capability. 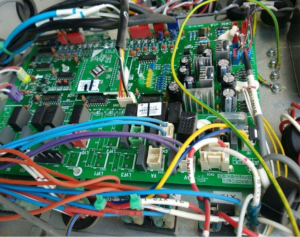 The use of a straight-through method is characterized by a strong overcurrent capability of the pad, which must be used
for device pins on high-power loops. At the same time, its thermal conductivity is also very strong. Although it works well for
heat dissipation of the device, it is a problem for the board soldering personnel. Because the solder is too fast to dissipate the solder, it is often necessary to use a larger wattage soldering iron and Higher welding temperatures reduce production efficiency.
The use of right-angle spokes and 45-angle spokes reduces the contact area between the pins and the copper foil.
The heat dissipation is slow and the soldering is much easier. Therefore, the connection method for selecting the copper pad of the via pad should be considered according to the application, the integrated overcurrent capability, and the heat dissipation capability.
The low power signal line should not be used for straight wiring, but for the high current pad, it must be straight. shop.
As for the right angle or the 45-degree angle, it looks beautiful.

Why did you mention this? Because I have been researching a motor driver for a while, the device of the H-bridge in this driver is always burned, and I can’t find the reason for four or five years. After my hard work, I finally found out that the pad of a device in the power loop was copper-plated using right-angle spokes when copper was laid (and because of the poor copper plating,
only two spokes actually appeared. ). This makes the overcurrent capability of the entire power circuit greatly compromised.
Although the product has no problems during normal use, it works perfectly at 10A current. However, when the H-bridge is short-circuited, a current of about 100A will appear on the loop, and the two spokes will be blown instantaneously (uS level).

Then, the power loop becomes an open circuit, and the energy stored on the motor is dissipated through all possible ways without the discharge channel. This energy will burn the current-sense resistor and related op-amp devices and destroy the bridge control chip.
It also breaks into the signal and power supply of the digital circuit, causing serious damage to the entire device. The whole process is as thrilling as a hairline detonating a big mine. Then you may have to ask, why are there only two spokes on the pads in the power loop? Why not let the copper foil straight up? Because, huh, huh, the staff of the production department said that this pin is too difficult to solder! The designer just listened to the words of the production staff, so… Hey, I found this problem to be a real headache for me.
It’s as simple as saying it, knowing it bitterly!

If the via hole is less than 0.3 mm, there is no way to use mechanical drilling. To use laser drilling,
the production and processing of the board are difficult. So my personal thought is if it is not very necessary to be a
minimum of 0.5mm outside / 0.3mm. But like computer motherboards, memory sticks, dense BGA packages, etc.,
sometimes as small as 14mil/8mil. My personal idea is that the inner diameter of the hole is generally 1.5 times the line width.
Of course, special thick lines (such as power supplies) do not need to be.