Is a container filled with high temperature saturated water vapor and high pressure? The laminated Laminates can be placed in it for a period of time to force moisture to enter the plate, and the plate removed Placed in a high temperature melting tin surface, measuring its “stratification” characteristics. This word is otherwise synonymous with Pressure Cooker, more commonly used by the industry. Another in the multilayer lamination process there is a high temperature and pressure of carbon dioxide “cabin pressure method”, also belong to this Autoclave Press.

Lamination in the multi-layer often refers to the copper in the improper handling of wrinkles is concerned. Copper foil below 0.5 oz is more prone to this disadvantage when laminated.

Refers to the surface of the copper showed mild and uniform subsidence, may be due to the use of lamination of the steel plate with its local point-like prominence caused by the emergence of the fault-like edge of the neat down, called Dish Down. Unfortunately, these shortcomings remain in the circuit after etching copper will cause high-speed transmission signal impedance instability and the emergence of noise Noise. Therefore, the copper surface of the substrate should be avoided as much as possible.

Multi-layer lamination in the press at each opening (Opening), often stacked on the “book” of the bulk material to be pressed (such as 8 to 10 sets), each set (Book), to be separated by a flat, smooth and hard stainless steel plate called the Caul Plate or Separate Plate, which is commonly used by people such as AISI 430 or AISI 630.

The multi-layer multi-layer board of the quantity production type has the outer layer of copper foil and film laminated directly with the inner layer to become a multi-layer board with a large number of rows of boards (Mass Lam) to replace the traditional single- Press law. 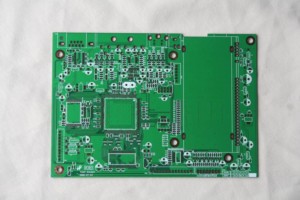 Multilayered kraft paper is used as heat transfer buffer when laminating or laminating laminated sheets. Is placed between the platen and the plate of the laminator to ease the temperature rise curve closest to the bulk. Make multiple sheets to be pressed between substrates or plies. As far as possible to narrow the temperature difference between the various layers of plates, the commonly used specifications for 90 pounds to 150 pounds. Due to the high temperature and pressure after the paper fiber has been crushed, no longer have the toughness and difficult to function, it must try to renew. Such kraft paper is a mixture of pine wood and various alkali co-cook until its volatiles escaped and remove acids, then washed and precipitated; until it becomes pulp, you can then suppress the rough and cheap paper material.

Multi-layer board in the press, when the openings in the plate are placed after positioning, and then began to heat from the bottom of the hot plate, with a powerful hydraulic column (Ram) up to pressure each opening ( Opening in the bulk of the glue. In this case, the prepreg begins to gradually soften or even flow. Therefore, the pressure used for the top squeezing should not be too large, and the sheet should not slide or the adhesive flow out too much. This lower initial pressure (15-50 PSI) is called “kiss pressure”. However, when the resin in each film is softened by heat and then hardened, it needs to be raised to full pressure (300 ~ 500 PSI) to ensure that all the bulk materials are in close contact to form a strong multi-layer board.

Multi-layer circuit boards or substrates before lamination, the need for the inner plate, film and copper and other bulk materials and steel, kraft paper padding, etc., from top to bottom alignment, off, or registration work to prepare Can be carefully into the press for hot pressing. This kind of prior preparation is called Lay Up. In order to improve the quality of multi-layer board, not only such “laminated” work in the temperature and humidity control of the clean room, and in order to mass production speed and quality, generally eight or less are adopted large plate method, Mass Lam) construction, and even need to use the “automation” of the overlap, in order to reduce human error. To save combined plant and equipment reasons, many factories will typically & quote; stacked & quote; and & quote; flap & quote; both merged into an integrated processing unit, so the automation project quite complex.

This is a multilayer lamination process to abandon the “alignment” and the use of the same multi-row plate of the new construction method. Since 1986, when the demand for four-layer and six-layer boards has grown rapidly, the laminating method has been greatly changed. In the early process board to be pressed only row aboard, this kind of one to one in the new law has been a breakthrough, according to their size into a pair of two, or a pair of four, or even more Press plate row. The second new law is to cancel the registration of various bulk materials (such as inner sheets, films, outer single sheets, etc.), and change the outer layers to copper foil and pre-make the target & quote ;, pending lamination that & quote; sweep & quote; out of the target, and then drilled from the center of the tool hole, you can set in the drilling machine for drilling.

Know more about PCB stack up