The following benefits are ideal for various electrical applications:

The increasing demand for necessary high power production needs an appropriate cooling system.
In some contexts, it has some rising demand at the same time,heavy copper pcb is more useful in the electronic application.

To find a solution, a new concept has been developed which is named as the heavy copper PCB board, compatible with high power currents, added with 200A.

Heavy copper PCB has the capability to conduct and implement an additional layer to keep things safe and work perfectly.

It is the newest trend in the PCB industry that ensures hefty electrical current flow through the electrical circuits.
The heavy copper PCB is highly efficient in distributing the flow of current and handling hazardous accidents by keeping the gadgets safe.
It supports almost every electrical device and offers a number of benefits. 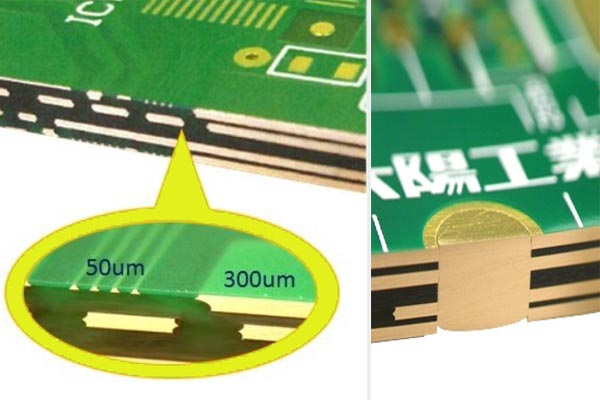 There is no specific definition for heavy copper PCB.
PCB states for Printed Circuit Boards which is laminated by ounces of finished copper in the inner and outer layers.

It is called heavy copper PCB because of the thickness of copper layers which starts from 3oz/ft2 to 10 oz/ft2.
For extreme heavy copper PCB,
It can be laminated with 20oz/ft2 to 200 oz/ft2 of improved copper.

The boards are manufactured by acquiring various etching and plating techniques and the goal is to add copper thickness to the plated holes and sidewalls.

The purity of copper is determined according to the weight, thickness of plating and proper substrate.
It also determines the strength of the PCB in the through-holes that can turn a weak board into a long-lasting one to perform in a dependable wiring platform.
Therefore, the thickness of the copper always needs to be measured during the circuit designing state in order to consider how much it can serve through operations.

The compatibility is assured by the resolution of current-carrying capacity measured by the width and thickness of heavy copper. 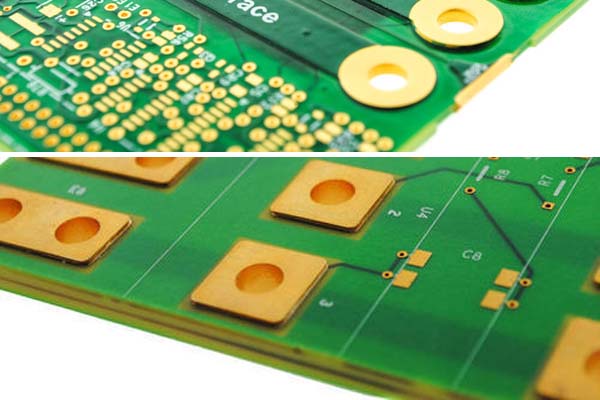 No matter single or double-sided PCBs, both need to go through the process of etching and plating.
The etching sheets of copper foil are the beginning of putting circuit layers.
Then the unwanted etched copper is removed and the plates are settled for adding thick layers of coppers to planes, traces, pads and plated-through holes.
After that, the entire circuit is being laminated into a complete package by using an epoxy-based substrate.

The PCBs are incorporated with heavy copper circuits to produce specialized etching and plating techniques.
Generally, the properties are formed completely by etching thick copper-clad laminated with the board material.
This creates uneven trace sidewalls and unacceptable undercutting.
The plating technology is getting advanced that allows heavy copper features to form with a combination of plating and etching.
This results in straight sidewalls and negligible undercuts. 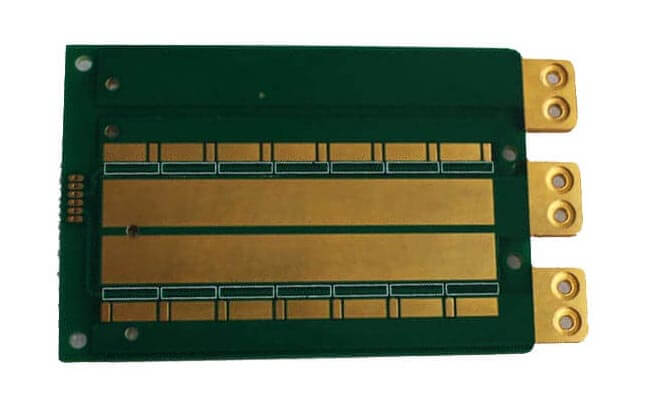 The heavy copper circuit starts to fabricate the board as soon as the thickness of copper increases the amount of copper thickness in plated holes via sidewalls.
Then it is the time when heavy copper can be mixed according to the standard feature of a single board.
Making the heavy copper PCB in this way includes some advantages such as reduction of layer count,
low impedance power distribution, smaller footprints, and potential cost savings.

Generally, high-current or high-power circuits and their control circuits are produced individually for different boards.
The reason is heavy copper plating makes it possible to integrate high-current circuits and
It controls the circuits to create a dense and simple board structure.

The features of heavy copper connect to the seamless standard circuits to place it with minimal restriction.
It provides the designers with the ability to fabricate and discuss the manufacturing methods to make it tolerant with temperature issues.
This needs to be utilized for heavy base copper to deliver a consistent and reliable high power circuit when placed in the plating and etching systems allowing the well-defined track edge within the fine lines and finer spaces.

The entire process also needs to be assured to work perfectly from prior to the final design. 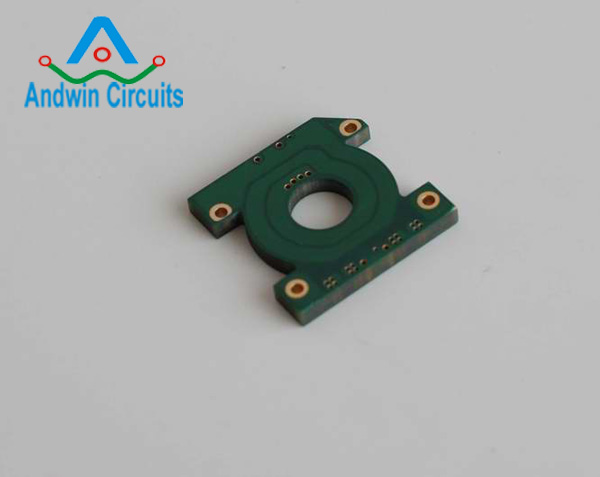 While designing a heavy copper PCB, the factors of thermal stress are the prime interest and engineers endeavor to hit the roof for the thermal pressure as much as possible.

The procedure of production goes into a progression period with various PCB technologies including Aluminum PCB.
This has been invented due to the capability of handling thermal stress.
The power budget can be minimized by preserving circuit performance and makes it environment-friendly design consisting of thermal sinking quality.
This is the actual concern while a heavy copper PCB is being designed 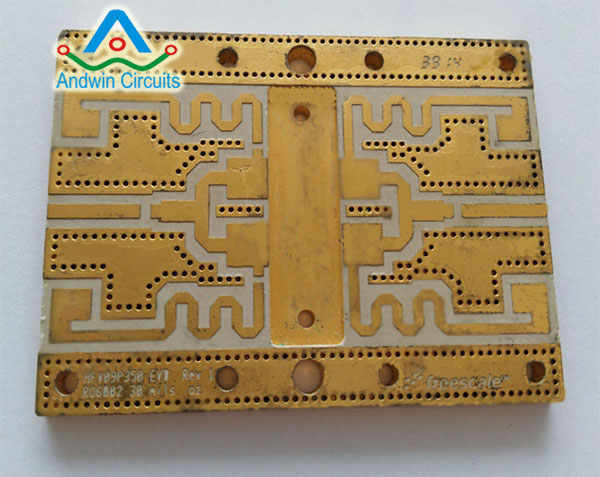 Any electronic gadgets with an overheating issue result in failure or go through life-threatening hazards.
Therefore, the thermal management system is paramount.

Generally, the heat sinking quality is measured according to the achievement of external heat sink usage of the heat-producing components.
The approach of such component connects according to the high temperature.
If the heat distribution is not desolated, then due to the dissolution of heat,
It will consume the sinking heat from the component and transfer to the surroundings.

Normally, the heat sinks are made of copper or aluminum but the development costs for the usage of heat sinks along with the demand for space and time are exceeding.

On the other hand, in heavy copper PCB, the heat sinks are being printed on the board at the time of assembling because it serves better than the usual heat sink.

Also, the limitations are less for the placement of  heat sink while the external heat sinks entail extra space.

Based on the requirement, heavy copper PCBs can be expensive to produce.
Thus, it is more complex in design but more effective in producing heavy copper PCB.
It should have the following capabilities: 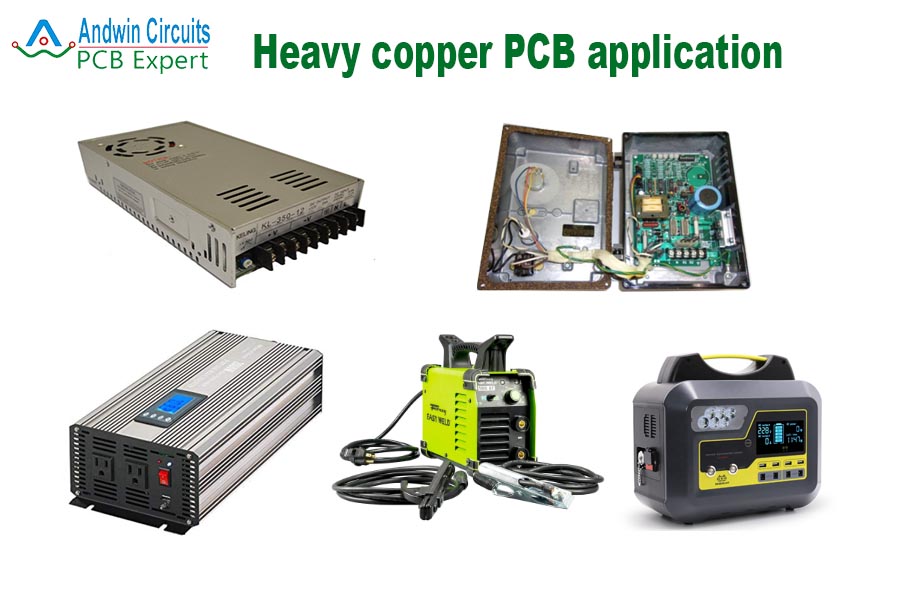 The increased demand for heavy copper-clad boards can be used in computer, automotive, military, and industrial controls.