The process of printing a circuit board from a light plate to a display line pattern is a process of complex physical and chemical reactions. This paper analyzes its last step – etching. At present, the typical process of printed circuit board (PCB) processing is “graphic plating”. That is, the outer part of the outer layer to be retained in the copper part, that is, part of the circuit on the part of the pre-plating layer of tin corrosion layer, and then chemically the remaining copper foil corrosion, known as etching.

The type of etching

It should be noted that there are two layers of copper on the board when etched. In the outer layer of the etching process, only one layer of copper must be etched away, and the rest will form the final desired circuit. This type of graphic plating, which is characterized by the presence of copper plating layer only below the lead tin resist layer.

Another method is the entire board are copper, photosensitive film outside the part is only tin or lead tin resist layer. This process is called “full board copper plating”. Compared with the graphics plating, the biggest drawback of the whole board copper plating is plated twice the copper surface and the etching must also be corroded them. So when the wire width is very fine will produce a series of problems. At the same time, side corrosion will seriously affect the uniformity of the line.

In addition, in the market can also buy ammonia / ammonium sulfate etching liquid. The sulfate-based etching solution, after use, can be separated by electrolysis and can be reused. Because of its low corrosion rate, generally in the actual production is rare, but is expected to be used in chlorine-free etching.

It was tested with sulfuric acid-hydrogen peroxide as an etchant to corrode the outer layer. This process has not been widely used in commercial sense due to many reasons, including economic and waste disposal, etc. Furthermore, sulfuric acid-hydrogen peroxide can not be used for the etching of lead-tin resist, which is not a PCB Outside the main method of production, so most people rarely ask.

The basic requirement for the quality of the etch is to be able to completely remove all copper layers except the resist layer. In the strict sense, if the precise definition is to be made, the etch quality must include the consistency of the wire width and the degree of lateral erosion. Due to the inherent characteristics of the current corrosion solution, not only down and around the direction of the etching effect, so the side erosion is almost inevitable.

The pitting problem is an item that is often discussed in the etch parameter, which is defined as the ratio of the lateral erosion width to the etch depth, called the etch factor. In the printed circuit industry, it varies widely from 1: 1 to 1: 5. Obviously, small side erosion or low etch factor is the most satisfactory.

The structure of the etching apparatus and the etching solution of the different components have an influence on the etching factor or the side erosion, or, in an optimistic manner, it can be controlled. The use of certain additives can reduce the side erosion. The chemical composition of these additives are generally trade secrets, their developers are not disclosed to the outside world.

In many ways, the quality of the etch is as long as it has existed before the printed circuit board enters the etch machine. Because there are very close internal links between the processes or processes of the printed circuit processing, there is no process that is not affected by other processes and does not affect other processes. Many of the problems that have been identified as the quality of the etch are actually present in the process of filming or even more.

For the outer layer of the etching process, because it embodies the “back stream” is like most of the printed circuit board processes are prominent, so many problems are reflected in the last above it. At the same time, this is also because the etching is self-adhesive film, the beginning of a long series of photosensitive process in the last ring, after the outer graphics that transfer success. The more the number of links, the greater the likelihood of problems. This can be seen as a very special aspect of the printed circuit production process.

Tin or lead-tin formation of the “edge” makes the film can not be removed when the photosensitive film completely clean, leaving a small part of the “residual glue” in the “edge” below. & Quot; residual glue & quot; or & quot; residual film & quot; remains below the resist & quot; along & quot; will result in incomplete etching. Lines in the etching on both sides after the formation of “copper root”, copper wire to narrow the line spacing, resulting in printed circuit board does not meet the requirements of Party A, and may even be rejected. Due to rejection will make PCB production costs greatly increased. 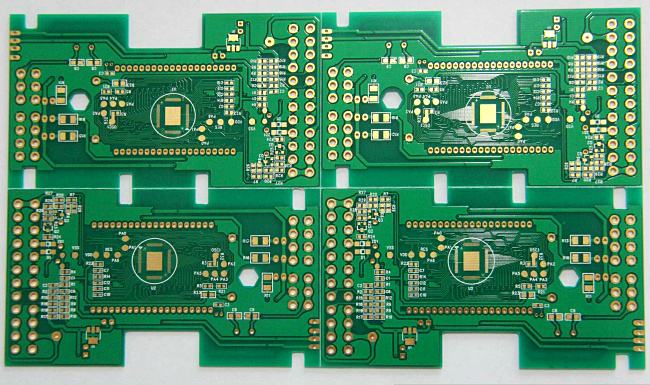 In many cases, in the printing circuit industry, the residual film and the copper may form a stack in the etching solution and block it at the nozzle of the etching machine and the acid pump, and have to be shut down and cleaned , And affect the work efficiency.

In the processing of printed circuits, ammonia etching is a relatively fine and complex chemical reaction process. On the other hand, it is an easy job. Once the process up, you can continue to produce. The key is to boot once the need to maintain a continuous working condition, should not dry stop. The etching process relies heavily on the good working condition of the device. For now, no matter what kind of etching solution to use, you must use high pressure spray, and in order to obtain a more neat side of the line and high quality etching effect, you must strictly select the nozzle structure and spray.

In order to get a good side effect, there have been many different theories that form different design patterns and equipment structures. These theories are often very different. But all the theories of etching have recognized such a basic principle that the metal surface is kept in contact with fresh etch as quickly as possible. The chemical mechanism analysis of the etch process also confirms this view. In the case of ammonia etching, assuming that all other parameters are constant, the etch rate is mainly determined by the ammonia (NH3) in the etchant. So the use of fresh solution and etching surface, the purpose of the main two: First, washed away just generated copper ions; the second is to continue to provide the required ammonia (NH3).

In the traditional knowledge of the printed circuit industry, especially the suppliers of printed circuit materials, it is recognized that the lower the content of monovalent copper ions in the ammonia etching solution, the faster the reaction rate. This has been confirmed by experience The In fact, many of the ammonia etching products contain a special ligand (a number of complex solvents) of monovalent copper ions, which act to reduce monovalent copper ions (these are the technical tips for their products with high reactivity ), We can see the impact of a copper ion is not small. The price of copper from 5000ppm down to 50ppm, the etching rate will be more than doubled.

This is a functional reason for passing air into the etch box. However, if the air is too much, it will accelerate the loss of ammonia in the solution and the PH value decreases, and as a result, the etching rate is lowered. Ammonia is also required in the solution to control the amount of change. Some users adopt the practice of passing pure ammonia into an etching reservoir. This must add a set of PH meter control system. When the automatically measured PH results below the given value, the solution will automatically add.

In the field of chemical etching (also known as photochemical etching or PCH), the research work has begun and reached the stage of the structural design of the etch machine. In this method, the solution used is divalent copper, not ammonia-copper etch. It will be possible to be used in the printed circuit industry. In the PCH industry, the typical thickness of the etched copper foil is from 5 to 10 mils, and in some cases the thickness is quite large. Its requirements for etch parameters are often more severe than in PCB industry.

A large number of problems related to the quality of the etch are focused on the etched part of the upper plate. It is important to understand this. These problems come from the impact of the upper plate etchant produced by the printed circuit board. The colloidal plate is deposited on the copper surface, which affects the jetting force on the one hand and blocks the addition of the fresh etchant on the other hand, resulting in a reduction in the etching rate. It is precisely because the formation and accumulation of colloidal panels make the upper and lower patterns of the board different etching degree. This also makes the part of the board in the etching machine to easily enter the part of the etching is completely or easily lead to corrosion, because then the accumulation has not yet formed, the etching speed faster. On the contrary, after the board into the part of the accumulation has been formed, and slow down the etching rate.

Etching equipment maintenance of the most critical factor is to ensure that the nozzle clean, non-blocking material leaving the jet smooth. The obstruction or slagging will impact the plate under jet pressure. If the nozzle is dirty, it will cause uneven etching and make the whole block of PCB scrapped.

Obviously, the maintenance of the equipment is to replace the damaged parts and wear parts, including the replacement of the nozzle, the same nozzle wear problems. In addition, the more critical issue is that there is no slagging in the etch machine, and in many cases slagging will occur, where the accumulation of slag is too much and even affects the chemical balance of the etchant. Similarly, if the etching fluid appears excessive chemical imbalance, slagging will become more serious. The problem of how to emphasize the accumulation of slag can not be too much. Once the etching fluid suddenly a lot of slagging situation, usually a signal, that is, the balance of the solution problems. This should be done with a strong hydrochloric acid to properly clean or add the solution.

Residual film can also produce slag, a very small amount of residual film dissolved in the etching solution, and then the formation of copper salt precipitation. Residual film formed by the slag that before the Road to the membrane process is not complete. Poor filming is often the result of a combination of edge film and over-plating.
Grace Zheng
Email: sales06@andwinpcb.com